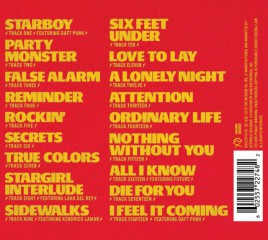 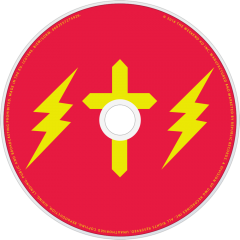 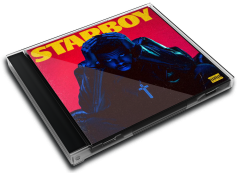 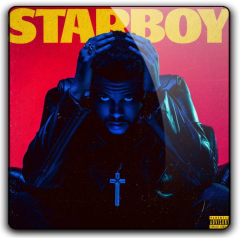 Starboy is the third studio album by Canadian singer and songwriter The Weeknd. It was released on November 25, 2016, by XO and Republic Records. The album features guest appearances from Daft Punk, Lana Del Rey, Future, and Kendrick Lamar. The album was supported by three singles: "Starboy", "I Feel It Coming" and "Party Monster".

After the commercial success of his album Beauty Behind the Madness in 2015, The Weeknd hinted at the release of his third studio album on March 12, 2016, with his Instagram calling it the next "chapter" to his music. On August 24, 2016, The Weeknd was confirmed by the Republic Records executive vice president Wendy Goldstein to be collaborating with the French electronic dance duo Daft Punk, during an interview with Billboard. On September 7, 2016, the album was confirmed to be in production from an interview with VMAN, with influence taken from Prince, The Smiths, Talking Heads and Bad Brains. On September 21, 2016, the album overall and its title was officially announced, with its release slated for November 25, 2016.

The album's sleeve is photographed and designed by Nabil Elderkin. It features The Weeknd with shorter hair in a crouched pose with a cross necklace and is highlighted by streaks of blue neon across a neon red background. The top of the picture says the album's name in yellow lettering and the edges of the packaging are grained by the blue neon.

User Album Review
Who is the Weeknd? That’s the question a lot of us asked when the act first materialized, fully-formed, with 2011’s House of Balloons. Thanks to the group’s savvy anti-publicity campaign, the question had a literal bent: who are the people who made these songs? Fast-forward five years and there’s little mystery remaining when it comes to the provenance of the Weeknd’s music—like so many modern pop songs, his are now designed in consultation with a committee of experts. And yet, even as we watch Abel Tesfaye walk the red carpet in the light of day, the question remains: Who is the Weeknd? Is he a drugged-out lothario? A beloved pop star? A nihilist foil to Drake? The second coming of Michael Jackson? The runaway success of last years’ Beauty Behind the Madness—two No. 1 singles and over two million units sold in the U.S.—seemed like it might finally force an answer to this question. And yet, Starboy, the Weeknd’s sixth overall album and third for a major label, only further muddies the waters.

Initially, there were signs that Starboy would represent a much-needed pivot, a rethinking of a sound and image that seemed to have run its course, from DIY mixtapes to the top of the charts. The album’s lead video features Tesfaye murdering a past version of himself before taking a cross-shaped bat to a condo full of awards and sales plaques. Starboy, however, is hardly a dramatic reinvention—if anything, it feels like a watered-down retread of the same old tropes. Beauty Behind the Madness managed to smuggle sleaze into the mainstream by refining Tesfaye’s pop songcraft, even as it doubled down on the darkness. Starboy eases up on both fronts, recycling melodies, ideas, and even whole songs while presenting a sanitized version of the Weeknd that often lacks any real sense of perspective. It’s a curious move for a guy who so decisively managed to succeed on his own terms.

As if to guarantee that it feels like a slog, Starboy is also overstuffed: over an hour of music stretching out over 18 songs, many of them bland. “Rockin’” sounds like a label executive’s idea of what the Weeknd could be: inoffensive club pop tailor-made for office karaoke parties (“I just want your body next to me/’Cause it brings me so much ecstasy/We can just be rockin’, yeah”). “False Alarm” snatches defeat from the jaws of victory, its sublime opening harmonies devolving into a screamed chorus that’s as contrived as Michael Jackson’s bellow at the beginning of “Scream.” “Six Feet Under,” a collaboration with Future, is essentially just a rewrite of the pair's much sharper “Low Life” (“Reminder” also recycles the vocal melody from “Low Life”); both here and on “All I Know,” the melodically-gifted rapper feels sorely underutilized. Kendrick Lamar’s verse on the autotune-heavy “Sidewalks” is characteristically dexterous but even he sounds a bit unenthused to be here. It’s hard to blame him.

There are a few bright spots on Starboy, moments that feel guided by a stronger vision. Both of the Daft Punk collaborations are satisfying, if hardly groundbreaking; “Starboy” glides like a sleek, high-performance car, while “I Feel It Coming” sounds like a slowed-down version of “Get Lucky.” “Secrets” pushes the Weeknd’s nocturnal sound into new wave territory, borrowing washes of clean guitar from Tears for Fears’ “Pale Shelter” and lifting the chorus from the Romantics’ “Talking in Your Sleep” wholesale. “True Colors” sounds like a ’90s R&B slow burner produced by Noah “40” Shebib (who was once apocryphally rumored to have ghost produced for the Weeknd). And “Ordinary Life” proves that Tesfaye is still more than capable of raising eyebrows, opening with a vivid description of fellatio behind the wheel before taking a hard left into petite mort fatalism (“David Carradine, I’ma die when I come”).

Starboy’s most interesting song is barely even a song. The two-minute-long “Stargirl Interlude,” finds Lana Del Rey reprising her role as Tesfaye’s foil, relating a pornographic “vision” over a minimal backing track, before Tesfaye closes out the song by cooing, “I just want to see you shine, ’cause I know you are a Stargirl.” The brief snippet is filled with the sort of tension that’s so lacking from most of Starboy, playing up the theatrics for which both artists are known. “I feel like we’ve always been talking to each other through our music,” Tesfaye said of Del Rey in an interview last year. “She is the girl in my music, and I am the guy in her music.” Here, the pair embrace that meta-narrative, responding to their perceived lack of authenticity by retreating fully into the pop fantasy where their characters connect. It’s a boldly self-aware move, one that smartly manages to wring art from artifice.

Starboy could use a lot more of this kind of audacity or really, any kind of coherent storytelling that challenges, complicates or further illuminates our understanding of the unfeeling villain that Tesfaye has been playing since day one. Instead, we get a grab bag of difficult to reconcile contradictions: a “Party Monster,” on one track, a doe-eyed balladeer on another (“Die for You”). Tesfaye used to be near-obsessive about packaging projects that felt narratively whole—after all, this is the guy who released an entire trilogy of interconnected albums in his first year. Starboy, by way of contrast, feels more like an opportunistic compilation of B-sides than an album. Who is the Weeknd? At this point, even the man behind the curtain might not know.