05) With a Little Help from My Friends 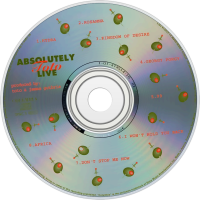 Absolutely Live is a live album released by the band Toto in 1993, with new vocalists Jenney Douglas-McRae, John James, and Donna McDaniel. Initially released in 1993, the album has been subsequently re-released in 1999 on Sony International.