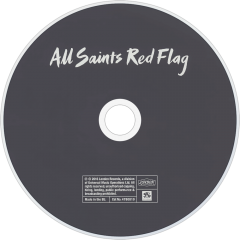 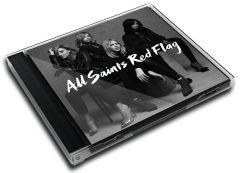 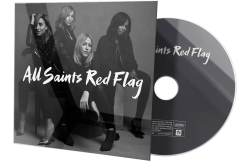 Red Flag is the fourth studio album by English-Canadian girl group All Saints. It was released on 8 April 2016, by London Records, which relaunched especially for the project. It serves as the group's comeback album, their first in nearly a decade, following the release of 2006's Studio 1, which resulted in them being dropped by Parlophone. A string of live performances and touring with the Backstreet Boys in 2014 sparked interest within the group to reform and record Red Flag. All Saints collaborated with producers K-Gee, Hutch, The Invisible Men and Utters for the album.

The album was preceded by the release of "One Strike" as its lead single on 23 February 2016. To promote Red Flag, All Saints played a headlining gig at London's KOKO on 4 April 2016 and will embark on their first headlining tour in 15 years, the Red Flag Tour, in October 2016.

In 2007, All Saints were dropped by Parlophone following lacklustre sales of their third studio album, Studio 1. Two years later, group member Melanie Blatt declared that All Saints would be "never ever getting back together again". A limited release of the group's third compilation album, Pure Shores: The Very Best of All Saints, was commissioned by Music Club Deluxe in September 2010. The group were approached to star in the second series of The Big Reunion, but promptly declined the offer in April 2013. Unexpectedly the following year, All Saints were invited to perform as special guests for five dates of the Backstreet Boys' In a World Like This Tour in Ireland and the UK. Their tour dates ran from 26 March to 5 April 2014. Although All Saints made no money from the tour and funded their sets themselves, they saw it as an opportunity to do what they enjoyed the most and did the least, describing the experience as "refreshing" and "money well spent". It ultimately sparked interest within the group to pursue a new studio album and full-scale comeback; group member Natalie Appleton explained: "We thought we'd just do it for a laugh, but then we just didn't want it to end. We liked being together. We wanted to be together. I mean we hang out anyway, but we wanted to be together in this world."

All Saints went on to perform additional gigs at G-A-Y, Manchester Pride and the V Festival that year. The string of live performances were viewed as a triumphant return for the group and prompted much reunion speculation. A promotional video was shared by All Saints on social media in June 2015, suggesting an upcoming project and tour. Similarly, on 1 January 2016, the group posted a promotional image of themselves looking upwards in front of a grey background with the text "2016".

Writing and recording of Red Flag began in April 2014 after the In a World Like This Tour. All Saints decided that they would not pursue a studio album had they not believed in the music they recorded. This was especially important for Blatt who considered the Studio 1 era and Parlophone contract fraudulent. In an interview for i-D, group member Shaznay Lewis said the comeback was about the group's relationship with each other and "nothing to do with the industry, or making money, or selling records". Unlike with the group's previous albums, Red Flag's recording happened casually and on good terms; Lewis stated it would have been completed "a lot quicker if spent less time joking around while making it".

Red Flag was the first album to be entirely arranged by the group with no record label input. Prior to its development, Lewis had taken notice of a new producer, Hutch, whose work she loved and saw the album as the ideal opportunity for a collaboration with him. The group also approached other producers including, Utters and The Invisible Men, and K-Gee who had produced much of their back catalogue. K-Gee insisted that All Saints worked with other producers before working with him and consequently became the record's executive producer. The track listing was ordered from the first track the group recorded for the album to the last. A total of 20 songs were recorded with eight later recordings not making the cut. The group became so involved during the recording and development process that they kept returning for additional sessions and further fine-tuning. Only when the album was complete did they seek investors and a label for the project.

Most tracks on Red Flag were written by Lewis with themes very personal to the group. They were written with a significantly more mature perspective than that of the group's previous releases. In an interview for The Observer, Lewis explained: "Because we're old enough to know that hey, life's not perfect, and it's not like: 'I'm in love and nothing bad will ever happen to me …' No. Shit happens." One Strike" was inspired by the breakdown of group member Nicole Appleton's highly-publicised marriage to Oasis and Beady Eye band member Liam Gallagher. It details Nicole's emotions when it was revealed to her that Gallagher had an affair and was expecting a child with American journalist Liza Ghorbani. Blatt cited Red Flag as the group's best output and her favourite All Saints album and the one she "always wanted to make", while Lewis said it "couldn't feel any more right".