02) Abyss Within My Soul 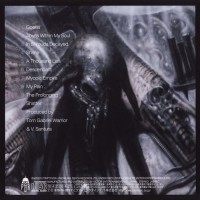 "Eparistera Daimones" is the debut album by Swiss extreme metal band Triptykon.The album was released by Prowling Death Records Ltd., under a licensing agreement with Century Media Records on March 22, 2010,and was released by Victor Entertainment Japan on April 21, 2010 with a bonus track, "Shatter".
Eparistera Daimones was produced by Tom Gabriel Warrior and Triptykon guitarist V. Santura and recorded in V. Santura's own Woodshed Studio in southern Germany, in the course of the second half of 2009. The album's artwork was provided by famous Surrealist painter H. R. Giger.
The title of the album is originally from Aleister Crowley's Liber XXV: The Star Ruby ritual. Eparistera Daimones, in Greek means On my left hand the Daemones or To my left, the demons.