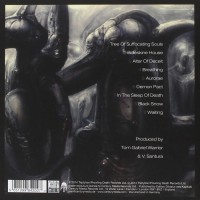 "Melana Chasmata" is the second full-length album by Swiss extreme metal band Triptykon, released through Prowling Death Records/Century Media Records on 14 April 2014 in Europe and on 15 April 2014 in North America.
The title is in Greek and, according to Fischer, it can be roughly translated as "black, deep depressions/valleys" or, in a more literal translation, "chasms as ink".
The album's artwork was provided by famous Surrealist painter H. R. Giger. It was Giger's last album cover before his death, just one week before the album's release.