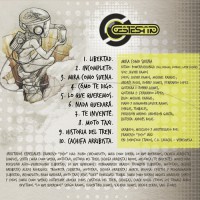 In 2015, after a long wait of four years of work comes to light "Mira Como Suena' the first full-length album of the Caracas band OesteSanto. His style is self-defined as "Power Pachanga" In this production they make it very clear with a tasty fusion where they mix genres like Ska, Reggae, Pop-Rock, Latin-Caribbean rhythms like Salsa, Cumbia and even some music Afro-Venezuelan as sangueo and Calypso.

OesteSanto members are characterized as "muy caraqueños (very Caracas-ish)" in his lyrics we will find experiences of the daily life on this city in songs like "Historia del Tren" which recounts a trip on the subway, or how "Moto Taxi" raises a call for attention to the modus operandi of these motorized workers from the capital; however they don't escape from composing romantic lyrics as the first single released in 2013 "Como te Digo".

The cover art was done by artist Randy Alcalá, a Venezuelan residing in Netherlands who based on the band's ecological ideals illustrated four heroes from the future on the 4 elements (Air, Earth, Fire and Water).

The cover is the element "Air", a man who remains unharmed thanks to his helmet which stores a plant that provides the oxygen necessary for life, from above, he is using OesteSanto's music as a tool to send messages to our polluted cities to go back to live in harmony with the planet.

The back cover is the "Earth" element, a girl scout whose main purpose is to find plants and place them safe from humans that still don't understand that the real treasure is in them. It is a being of peace, always carrying on his helmet OesteSanto's music as inspiration for a better future.