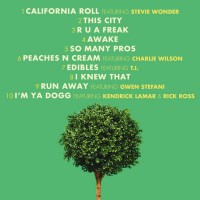 On August 28, 2014, a video was released of what would be a preview of one of the songs work together between Snoop and Pharrell. In September 2014, Snoop announced in his account on Instagram, his new work together with Pharrell. The LP is the first studio album entirely of hip hop released by Snoop since Doggumentary; released on March 29, 2011. Since then, Snoop and good friend Wiz Khalifa released the soundtrack Mac & Devin Go to High School, which contained the hit single "Young, Wild & Free" (top ten in the Billboard Hot 100). The song was nominated for a Grammy under the category of Best Rap song. In 2013, Snoop used the moniker Snoop Lion, and released his first reggae and twelfth overall album, entitled Reincarnated, that came to be nominated 56th Annual Grammy Awards in the category Best Reggae album. At the end of 2013, he used another moniker Snoopzilla, in reference to Bootzilla, and joined the music producer Dâm-Funk to launch the entirely of funk collaborative album entitled 7 Days of Funk.

The album was produced entirely by Pharrell Williams, with additional production by Williams' Neptunes partner Chad Hugo. The duo had worked in partnership with the rapper in albums Paid tha Cost to Be da Boss (2002), R&G (Rhythm & Gangsta): The Masterpiece (2004) and Tha Blue Carpet Treatment (2006). The partnership between the two artists has earned several singles of successes for both Snoop Dogg and for Pharrell, including "From tha Chuuuch to da Palace", "Beautiful" and "Drop It Like It's Hot", among others.