10) Summer Dying Fast
11) Interlude: Creatures That Kissed in Cold Mir
12) From the Cradle to Enslave 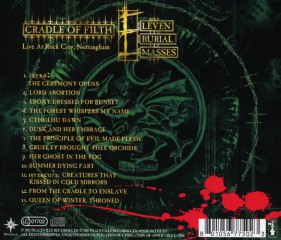 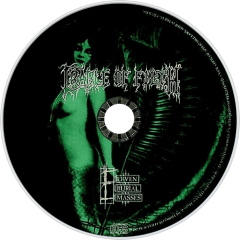 Live Bait for the Dead is a live album by Cradle of Filth, recorded at Nottingham Rock City on 14 April 2001 and released on 19 August 2002. The album was released and (uniquely, so far) distributed on the band's own Abracadaver label. The same gig is included on the DVD Heavy, Left-Handed and Candid. Following the same format as Lovecraft & Witch Hearts, the main album is supplemented by a second disc of rare tracks and remixes. This would be bassist Robin Eaglestone's final recorded appearance.

A 2007 release by Peaceville Records titled Eleven Burial Masses combines the first disc of Live Bait for the Dead with the Heavy, Left-Handed and Candid DVD (minus the bonus features). The "eleven" of the title does not take into account the instrumentals "The Ceremony Opens" and "Creatures That Kissed in Cold Mirrors".
In October 2011 it was awarded a gold certification from the Independent Music Companies Association which indicated sales of at least 75,000 copies throughout Europe.