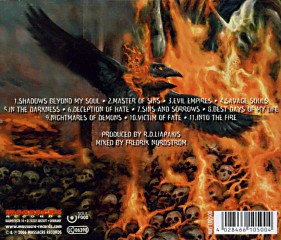 Savage Souls is the fifth full length studio album by the German power metal band Mystic Prophecy, released 24th February 2006 through Massacre Records.
Behind track #11 there's after 9:13 minutes of silence a hidden / secret spoken outro for about 30 seconds. A limited edition digibook version of the album was released including a DVD of the band performing most of the tracks live for an audience of their biggest fans.