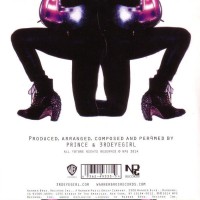 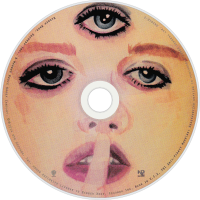 A companion record to the solo effort Art Official Age, PlectrumElectrum finds Prince backed by 3rdEyeGirl, the all-female power trio that is a band for the 2010s. If Art Official Age veered toward revamped soul, PlectrumElectrum, as its convoluted title suggests, celebrates guitar freakouts: it's heavy on fuzz tones and pummeling backbeats, taking digressions into spacious jazz fusion and clean funk. Prince doesn't take the lead all that often -- he steps to the mike for the hardest rockers, the exception being "Anotherlove" -- letting Donna Grantis or Ida Nielsen front the softer, quirkier numbers. The carousel of lead vocalists suits the carnivalesque tone of PlectrumElectrum, which feels casually virtuosic as it slides from thick rockers into slow jams before jolting itself to life with a shot of distortion. There are distinct differences from Art Official Age -- there's an elasticity to the rhythms that contrasts with the precision of the beats, 3rdEyeGirl seize any opportunity to blast away the confines of the song so they can simply jam -- but take away the reliance on guitar rock and this album draws from a similar source of slow smooth soul, pop, and hammy rap that feels deliberately divorced from hip-hop. Perhaps you could call this celebration of traditional musicianship old-school, but more than anything PlectrumElectrum feels like it belongs to its own little universe, a place that not only celebrates all of Prince's favorite sounds but his own kinks and eccentricities. If those eccentricities don't feel as strange or startling as they once did, blame that on the curse of being a veteran: he's not exploring new territory but building upon the ground he's already claimed for himself. And if the songs on PlectrumElectrum don't stick the way those on Art Official Age do, it's nevertheless a quiet thrill to hear Prince spar with worthy partners, as he does throughout this record.

Album Review
Funny thing is, and it is purely down to the sheer length of time waiting for Plectrumelectrum (since 2010’s 20Ten to be exact), the relief, which was palpable when this was finally released, for there were plenty of dark moments when even the most believing of Prince fans fought off waves of doubt that the album would ever see the light of day, was tempered only in that Plectrumelectrum came out with Art Official Age on the same day. Yet it had always been Plectrum I have been so desperate to hear more so than any other Prince release in my 25 years as a fan because of that long wait to getting it. The big question that arises out of this is will this much delayed ‘debut’ album of 3rdEyeGirl also be their last. The Revolution saw three albums and the NPG only two. But unlike other projects the energy and youth of the 3rdEyeGirls provide an inoculation, not sidetrack, to Prince career. Throughout Prince is sharing, not feigning responsively to his fellow band members – yes, he holds them all on equal par and doing so was the key to the album’s appeal. The opener dispels all that pre-release pent up anxiety, a one-word description of the entire album – Wow! It’s odd not hearing Prince on all the songs and it in that way harks back to when he did it first on Parade (I Wonder U), yet his presence is not only felt but heard keenly throughout. This does remain a true collaboration album, however. His trust in the band’s musicianship is based in the fact they as a quartet are as tight as any serious rock band. Plectrumelectrum is the perfect cocktail of hard (Aintturninaround, Plectrumelectrum), reckless (Marz – a channelling Plastic Bertrand), dreamy (Wow, Stopthistrain), earthy (Anotherlove) and retro (Fleetwood Mac inspired Tictacto) voyage through music fans have grown to expect from Prince releases: Boytrouble and Funknroll pack the real punch. With too many outstanding tunes it’s just far simpler to call out the weakest: Fixurlifeup. The highs just keep coming in what must be a reward for a truly long wait for a Prince album – and one that begs to be played loud. Electric.