Where Blood and Fire Bring Rest

Track List
01) Lies of Serpents, a River of Tears 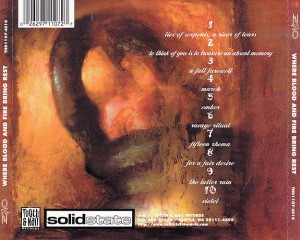 Where Blood and Fire Bring Rest is the third full-length album released by metalcore band Zao on Solid State/Tooth & Nail. It was the first album to feature vocalist Dan Weyandt after the departure of Shawn Jonas along with new bassists/guitarists, Russ Cogdell and Brett Detar. The album contains a sample from the film The Shining at the end of "Lies Of Serpents, A River of Tears", as well as a sample from the horror film The Prophecy during the intro to "Ravage Ritual". It is often considered among the greatest metalcore albums ever made.