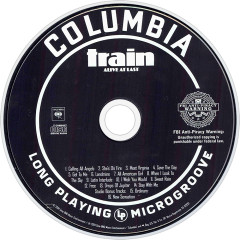 Alive at Last is a live album by Train recorded at Workplay Theatre in Birmingham, Alabama over three consecutive nights from June 9 to June 11, 2004.

It included most of the hits from Train's catalogue, even boasting some rare B-side tracks, and a cover of The Faces hit "Stay With Me".

The final two tracks on the album, "Ordinary" and "New Sensation" were included as bonus studio tracks. "Ordinary" was originally written for the movie Spider-Man 2 and appeared on the soundtrack, it was also released as a single.