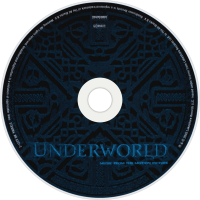 The film's soundtrack was produced by Danny Lohner and distributed via Roadrunner Records. Lohner (born 1970), a bass guitarist, guitarist and keyboardist who has recorded with Nine Inch Nails and Marilyn Manson, contributed several songs to the soundtrack under the pseudonym Renholdër. Lohner included a song by Skinny Puppy, a Canadian industrial band.; a song by The Dillinger Escape Plan, a US band which performs an aggressive, technical style of hardcore punk called mathcore; a song by US alternative rock/post-hardcore band Finch entitled "Worms of the Earth"; a song by The Icarus Line, a band known for its abrasive form of rock music; and Lisa Germano, an American singer/songwriter and multi-instrumentalist who specializes in alternative rock and dream pop.

Music critic Bill Aicher notes that the "soundtrack follow[s] in a similar gothic vein" to the visuals and states that it "does an excellent job setting the dark mood" by using "a veritable who's who in the genre" with an "impressive array of metal, hard rock, industrial, and otherwise gothic-themed tracks". Aicher notes that since "a majority of the selections [are] written, produced, or featuring Lohner, the album retains a sense of cohesion throughout, making it much more a complete product than has generally been the case with similarly-themed products." He states that the "album's highest point" is the song with Maynard James Keenan (from Tool and A Perfect Circle), David Bowie, and guitarist John Frusciante (of the Red Hot Chili Peppers), which is entitled "Bring Me the Disco King" (Lohner Mix); he calls the song "[d]ark, brooding, sad, and twitchy".