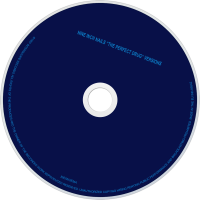 Though "The Perfect Drug" Versions acts as a single for the titular song, the original version does not appear on the American single. A slightly extended version of "The Perfect Drug" has also been included on the foreign singles "We're in This Together, Part 3" and "Into the Void", but the only audio release of it in North America has been on the Lost Highway soundtrack. The music video for song was directed by Mark Romanek, and is on the Closure video compilation and The Work of Director Mark Romanek.

Despite being a single, "The Perfect Drug" has never been performed live. On the official NIN website, "Sara" asked whether this is because "the drum solo would make Jerome's arms fall off." Then-drummer Jerome Dillon replied that they "never rule out the possibility of playing any of the songs live."

On April 6, 2005, despite the song's fast-moving worldwide success, while presenting the late-night BBC Radio 1 Rock Show in the UK, Trent Reznor responded to the question "which piece of your own work are you least satisfied with and why?" by saying "the only thing I think I really don't like that much is The Perfect Drug song. It was one of those things where you have a week to do a track for a movie, the mindset that you kind of adapt in that situation, or I did, was 'let's go in and experiment and see what happens, and it's not, y'know, whatever comes out of it, it's not the end of the world'. And I think what came out of it, married with a bloated, over-budget video, feels like ... the least thing that I would play to somebody if they said play me, y'know, the top hundred songs you've written, that probably wouldn't be in the top hundred. I'm not cringing about it, but it's not my favorite piece."

"The Perfect Drug" was released as a track for the video game Rock Band on February 26, 2008 for Xbox 360 and on February 28 for PlayStation 3. It is available as a standalone download or as part of the 'Nine Inch Nails' song pack along with "March of the Pigs" and "The Collector". It is viewed as one of the hardest songs to play on drums in the game. It later appeared in Rock Band Unplugged.

"The Perfect Drug" has been covered by Die Krupps, Vanna, and The Chordials.

The song is one of 31 music files in the Sony BMG v. Tenenbaum case, which resulted in finding the individual file-sharer liable for copyright infringement in July 2009, demanding an award of $22,500 a song.

Music video
Reznor in a full Edwardian-styled costume as he rises on a deep fog of water while a wall covered in topiary vines can be seen behind in the music video for "The Perfect Drug".
A music video for the single was directed by Mark Romanek and released on January 18, 1997. The theme was inspired by the illustrations of 20th-century artist Edward Gorey, with familiar Gorey elements including oversized urns, topiary plants, and glum, pale characters in full Edwardian costume. The most obvious reference to Gorey is the boy sitting on the cushion in front of the painting. Other references include an unidentified painting resembling Gustav Klimt's The Kiss (1907–1908) and a "Scanning Machine" designed by Frenchman François Willème in 1860.

The video is widely interpreted as Trent Reznor portraying a man mourning the death of a child and detaching himself from reality through absinthe. Charlie Clouser, Danny Lohner, and Chris Vrenna also appear in the video, most notably playing string instruments at the beginning of the video. The entire video was filmed with a blue tint with the exception of the drum breakdown, which uses flashing green light instead. Joanne Gair's work with Nine Inch Nails on "The Perfect Drug" won her the makeup portion of the best hair/makeup in a music video at the Music Video Production Awards.

EP
"The Perfect Drug" Versions is the eleventh official Nine Inch Nails release and consists of five remixes of the song "The Perfect Drug." The European, Australian, and Japanese releases append the original version of the song, while a promotional vinyl set adds an exclusive sixth remix, by Aphrodite.