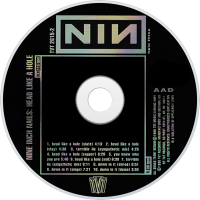 "Head Like a Hole" is a song by the American industrial rock band Nine Inch Nails. A song influenced by industrial metal group Ministry, it was released as the second single from the group's debut album Pretty Hate Machine. The song received an almost overwhelmingly positive response from critics, and has been noted as the best track on the album.

Recording
Trent Reznor wrote "Head Like a Hole" in 1988, after touring with Skinny Puppy. Flood, Adrian Sherwood, and Keith LeBlanc were co-producers of the song, and it was recorded in 1989. "Head Like a Hole" was one of the last songs completed for the album, since Flood did not arrive to the studio until the completion of Depeche Mode's Violator (1990).

The title of the song comes from a sample of a Ministry concert in 1987, which Reznor recorded on a video tape camera and later used in the song's production. The name of his project, Nine Inch Nails, which according to Reznor has no "literal meaning", was also taken from the same tape, during a portion where Al Jourgensen compares Ministry to a man with a tall nail hammered into his head, creating a hole there:

"Listening to Ministry is like having a nine inch nail hammered into your head like a hole."

Music and lyrics
Although classified as an industrial rock song, "Head Like a Hole" takes its influence from Ministry, as well as the thrash metal genre. The tempo is 115 BPM, and it is played in the key of E.

The chords of this song are similar to the project's debut single, "Down in It". In contrast to "Down in It", "Head Like a Hole" has a longer intro, lasts roughly one minute longer (the song is five minutes long in its aggregate length), is heavy metal music-oriented, and has no rapping. "Head Like a Hole" is also the opening track on Nine Inch Nails' 1989 debut, and is one of the two Nine Inch Nails songs produced by Flood to appear on Pretty Hate Machine, as seen in the album booklet's liner notes.

A well-known line in the song, "you're going to get what you deserve", is a recurring element in a number of Trent Reznor-written songs, both in same and altered forms. For example, in the ninth track of 2007's Year Zero, "Meet Your Master", the first verse ends with the same line, quickly before the chorus begins.

Release and reception
Labeled as "Halo 3", Head Like a Hole is the third official Nine Inch Nails release, containing remixes of three different songs from Pretty Hate Machine. The single release is longer in duration than the album itself. The single peaked at #28 on the Billboard Modern Rock Tracks chart.

A three-track version of this single was released in the UK containing "Head Like a Hole (Opal)" which is not included on the US release. This version beings with a sample of "Tamborine" by Prince, taken from his 1985 album Around the World in a Day and incorporates a drum loop sampled from "Release It" taken from another Prince record, the soundtrack to the Prince-directed movie Graffiti Bridge (1990).[citation needed] The saxophone in "Release It" can be heard before the drum loop begins. "Head Like A Hole (Copper)" samples the looping drum beat from "Body Language", a track off of the Hot Space (1982) album by Queen.[citation needed] The first track is mistakenly listed as "Head Like a Hole (Slate)" on the CD. "Down in It (Shred)" and "Down in It (Singe)" were previously released on the "Down in It" single; the latter track is extended by 18 seconds. The unlisted eleventh track is Kelly Ripa yelling "Let's hear it for Nine Inch Nails! Woo! They're good!" This is a sample from Dance Party USA during an appearance by the band on the show.

The 11-track United States version of "Head Like a Hole" has recently been repackaged and re-released. This version was also released in the United Kingdom, where it failed to reach the Top 40 Finally, in Germany, the single was released as "You Get What You Deserve". This release includes four tracks.

In a retrospective review of the song, Allmusic described "Head Like a Hole" as "grand theater", elaborating further by commenting the "backing music was immaculately crafted and produced". In its review of the single, the author was largely positive towards the song selection, even saying that the inclusion of "Head Like a Hole", "Terrible Lie", and "Down in It" "renders Pretty Hate Machine mostly unnecessary". As for the other tracks included on the single, Allmusic was less positive, adding, "This is one case where quality definitely would have sufficed without the quantity".

Music video
A music video was made for the "Clay" remix of this song. Directed by Eric Zimmerman, it was released in March 1990 and again later in 1997 on the Closure VHS. The video became popular on MTV and helped fuel NIN's early success. A slightly different edit of the video was also released for Flood's remix of the song, which is 17 seconds shorter than the "Clay" remix. The video features band members Trent Reznor, Richard Patrick, and Chris Vrenna, as well as guest drummer Martin Atkins performing in a cage.

The video begins with black and white footage of a person hopping on one foot while spinning a staff which fades in and out against a background of blurred colors. Clips of Reznor putting his head in a bucket of water, and an off-screen person using the same bucket to make Reznor wet, were taken by a video camera before filming a performance of the song from Nine Inch Nails as a live band.

The guitar Reznor uses in the video is a Jackson Dinky. It is first seen in first chorus, when Reznor, appearing to be dirty like the other band members (he had long hair and wore gritty clothing during production), bangs his head twice while singing the song. He does not use the guitar for the climax of the video, where wires tied to him slowly pull him up, leaving the frontman spinning upsidedown insanely. At the same scene, Vrenna destroys his drum kit by throwing a bass drum of Atkins' drum kit towards the object. At a shot occurring prior to that point, broken Zildjian cymbals and a drum machine can be seen as parts of Vrenna's kit.

There are images that are shown for a few frames like "HEAD", "16 SOUND START", "S M P T E UNIVERSAL LEADER" and "PICTURE". Other images included a white dot set against a black background, a mirrored presentation showing the words "REEL № PROD № PLAY DATE" colored in yellow, one with the words "PICTURE START", and a frame consisting of "C C F F" placed near an outlined ring. The latter screen had an alternative version that was accompanied by a white number 3, also seen in the video. There are also visuals of four incomplete rotating mechanical models of human heads; one with film stills, another with a modified motherboard and other technology, the purple, wired, head with a blue screen showing an eye and various computer hardware, and the last containing blue skin, orange-pupil eyes, and a lightbulb. The former two were filmed in black and white, while the latter two in full color. All four are shown intercut with shots of people spinning baseball bats.


"Head Like a Hole" was one of the most notable moments of Nine Inch Nails' Lollapalooza festival performances.
The song has been the encore for most NIN shows (especially the Pretty Hate Machine Tour Series), or the last song before the encore if an encore took place. There are live videos of "Head Like a Hole" on the DVDs And All That Could Have Been and Beside You in Time.

During Lollapalooza '91, Dave Navarro, Eric Avery, Gibby Haynes and Ice-T joined Nine Inch Nails live performances on-stage as additional guitarists for "Head Like a Hole". For the Nights of Nothing mini-tour in 1996, Richard Patrick made a brief return to the band to perform guitar and vocals on "Head Like a Hole" at the Irving Plaza show in New York along with Clint Mansell, who joined NIN on this song at all three shows of the tour. In the June 7, 2006 radio performance at Atlanta, Georgia, Trent Reznor and Peter Murphy played a reworked version of "Head Like a Hole".

Lisa Kennedy Montgomery once sang the song loudly to Reznor to win a $20 bet. To express the evolving state of his values, Reznor said in 1997 that "I don't want to be singing "Head Like a Hole" at age 50."

Legacy
Since its commercial maxi-single release, "Head Like a Hole" continues to generate an impact on other musicians and bands. New Zealand-based grunge band HLAH is named after the song. The name is sometimes abbreviated to avoid copyright infringement issues.

"Head Like a Hole" generated controversy after the September 11, 2001 attacks, when Clear Channel Communications placed it in a 2001 list of post-9/11 inappropriate song titles not for radio airplay.