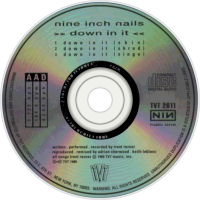 "Down in It" is a song by American industrial rock band Nine Inch Nails, released in 1989. Released as the project's debut single, the song was the first to be written by Trent Reznor, the only constant member of the act. It was released as a teaser single prior to the debut album, Pretty Hate Machine. A tape consisting of footage from the song's music video was brought to the FBI by a farmer in Michigan, and spawned an investigation that focused on Reznor's character as a person who committed suicide.

"Down in It" has been covered by Eric Gorfain, The Meeks, Sasha and Tiga. The song's lyrics share similarities with those of "Only," a track found on the album With Teeth, released in 2005. The opening verse of Down in It contains the lyric "Just then a tiny little dot caught my eye," while the second verse of Only opens with the lyric "Well, the tiniest little dot caught my eye." In "Only," Trent elaborates on what that dot was ("a scab trying to seal itself shut"), while both songs also include several references to personal growth and change: "fading away" from the kind of person the protagonist once assumed himself to be and an uncertainty as to who they will inevitably become.

A remix of "Down in It" was used in an early 1990s Gatorade television advertisement. Originally, "Steppin' Out by Joe Jackson was to be featured in the commercial, but Jackson declined the offer. Reznor unsuccessfully sued the production company who created the commercial for copyright infringement after he saw it in 1993, accusing them for illegal use of the song without permission.

Around the time of the single's release, the band lip-synched a performance of the song on the dance music program Dance Party USA. The video was rediscovered in 2012 and went viral after being uploaded to YouTube. Trent Reznor responded to the video's re-discovery on his Twitter account stating that the band had decided to appear on the show after deciding it was "the most absurd choice they could come up with at the time" for a television program they would be interested in performing in, and were surprised when they were actually booked to appear on the program.

Reznor has mentioned in an interview that the song was influenced heavily by "Dig It", a song by Skinny Puppy from their 1986 album Mind: The Perpetual Intercourse.

Single release
"Down in It" was the first official Nine Inch Nails release and the first single from the album Pretty Hate Machine. Initially released only on vinyl, a CD version was later created after the success of the album.

The first track on the single, "Down in It (skin)", is the mix that is found on Pretty Hate Machine. The cover art is very similar to Joy Division's first album, Unknown Pleasures. Joy Division has always been cited as an influence by Reznor, and he later covered their song "Dead Souls" on the soundtrack to The Crow.