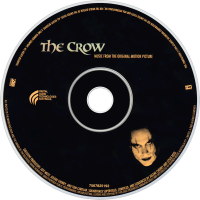 The soundtrack to the movie The Crow was released in 1994. Its biggest hit song was "Big Empty" by the Stone Temple Pilots, which was also on their album Purple.

The album featured covers, including Nine Inch Nails who covered Joy Division's "Dead Souls", Pantera who covered Poison Idea's "The Badge", and Rollins Band who covered Suicide's "Ghost Rider", which is about a Marvel Comics character. Rage Against the Machine re-recorded their 1991 b-side "Darkness of Greed" and renamed it "Darkness" for this soundtrack. The Cure also wrote the song "Burn" for the movie. Stone Temple Pilots originally re-recorded a song off their Mighty Joe Young demo, titled "Only Dying", but removed it when Brandon Lee passed away.

The inclusion of songs written by The Cure and Joy Division are notable because the influences of both bands are present in the original comic book. James O'Barr, the creator of The Crow, reprinted the lyrics to the song "The Hanging Garden" by The Cure on an entire page, and some chapters of the comic book are named after Joy Division songs, "Atmosphere" and "Atrocity Exhibition", for example. In one panel, Eric even quotes a lyric from the song "Disorder" from the album Unknown Pleasures. O'Barr was a big fan of both bands when he was creating the comic book.

The other music in the film which is not included in the soundtrack is instead on The Crow: Original Motion Picture Score of original, mostly orchestral music, with some electronic and guitar elements, written for the film by Graeme Revell.