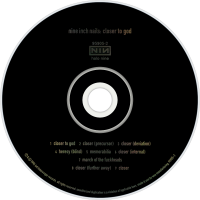 "Closer" is a song written by Trent Reznor and featured on the 1994 Nine Inch Nails album The Downward Spiral. In mid-1994, the song was released as the second single from the album. Most versions of the single are titled "Closer to God", a rare example in music of a single's title differing from the title of its A-side. ("Closer to God" is also the title of an alternate version of "Closer" featured on the single.) Labeled "Halo 9", the single is the ninth official NIN release.

A promotional single provided by the label to radio stations included both long and short vocal-censored-i.e.: silenced profanity-versions. In spite of misinterpretations of the song as a lust anthem, "Closer" became Nine Inch Nails' most successful single up to that time, cemented Reznor's status as an industrial rock icon, and remains arguably his best-known song. Censored versions of the song and its Mark Romanek-directed music video received substantial airplay on radio and MTV.

Radio edits of "Closer" were created by muting the vocal track for the duration of each deleted obscenity.

Lyrically, "Closer" is a meditation on self-hatred and sexual obsession, but to Reznor's dismay, the song was widely misinterpreted as a lust anthem due to its chorus, which included the line "I wanna fuck you like an animal". In 2003, VH1 ranked the song at number 93 in its countdown of the "100 Greatest Songs Of The Past 25 Years." The song was ranked at the number 2 position on AOL's "69 Sexiest Songs of All Time," mostly due to the explicit frankness of the chorus.

The music video was directed by Mark Romanek and first aired on May 12, 1994, having been filmed in April of that year. It was cut down from its original length to 4:36. The video was popular and helped bolster the success of the band. The video shows events in what appears to be a 19th-century-style mad-scientist's laboratory that deals with religion, sexuality, animal cruelty, politics, and terror. Its imagery was controversial and included:

A heart connected to some sort of device; the beat of the heart corresponds to the beat of the song
A nude, bald woman with a crucifix mask.
A monkey tied to a cross.
A severed pig's head spinning on some type of machine.
A diagram of the vulva/vagina.
Reznor wearing an S&M mask while swinging in shackles.
Reznor seated in front of a wall covered in fetish gear, wearing a ball gag.
Several times, Reznor, wearing leather pants, floats and rotates through the air, suspended by invisible wires. There are also scenes of Reznor being blown back by a wind machine while wearing aviator goggles.

These images seem to be inspired by the art of Joel-Peter Witkin, as well as Francis Bacon and George Tooker. The video is also very heavily inspired by the animated short film Street of Crocodiles, with much of the video being a live-action recreation of the sets and scenes from that film. For the television version, certain removed scenes were replaced with a title card that read "Scene Missing," and the instances of the word fuck being edited out were accompanied by a stop in the video motion, making it appear as if the stop was a result of defective film (this was supposedly done to make sure the flow of the song was not affected). According to director Mark Romanek, the video was filmed using "a slightly out of date film stock but it was still a contemporary film stock.

They had stopped making it three years before and we found some of it. All the new color film stocks have this T-Grain, like little Ts that are interlocking. The film stock we used had the original old granular grain. The new stocks are just really modern looking, really sharp, really contrasty, very fine grain. We didn't want that. Normally you don't want to use that kind of stock because the colors will be off. It does have a shelf life but in this case we didn't care, the more fucked up it was the happier we were.

The unedited version of this video was shown on Playboy TV's music video show Hot Rocks in 1994. In mid-2002, the unedited version of this video was aired on MTV2 as part of a special countdown showcasing the most controversial videos ever to air on MTV. This countdown was only shown late at night due to the graphic imagery of "Closer" and several other videos.

In 2006, "Closer" was voted number one in a VH1 Classic poll titled "20 Greatest Music Videos of All Time."

In retrospect, Reznor commented about the video that "The rarest of things occurred: where the song sounded better to me, seeing it with the video. And it's my song."

"Closer" had some radio airplay before it was released as a single. This factor increased within weeks, leading Interscope to release the song in May 1994.

When it premiered, the single charted on several Billboard magazine music charts; debuting near the bottom spot of the Billboard Hot 100, it missed the Top 40 spot (peaking at number 41). It crawled to number 11 on the Modern Rock Tracks, and went on to reach number 35 on the Hot Mainstream Rock Tracks, number 29 on the Dance Music/Club Play Singles, and number 29 Hot Dance Music/Maxi-Singles Sales, this is the band's first crossover hit and remains their most popular song to date. The single's highest peak is the Top 5 on the Canadian Singles Chart. "Closer" didn't top any of these charts, and failed to reach number one. However, it didn't gain enough success in the US, it was a massive success in Canada on the Canadian pop charts and the Alternative 30 charts both hitting number 5.

During the Self Destruct and Fragility tours, bassist Danny Lohner and guitarist Robin Finck joined Reznor on keyboards for the song, with Reznor performing an extended synth solo.

There are performance videos of "Closer" on And All that Could Have Been and Beside You in Time.

In the tours following the release of With Teeth, Nine Inch Nails performed a shorter version of "Closer" with the keyboard solo played as a guitar solo and a breakdown incorporating a portion of "The Only Time," a track from Pretty Hate Machine. Two performances of this version of the song this appear on Beside You in Time.

The version of "Closer" on the single is 13 seconds longer than the album version; on the album, the piano tune at the end of the song is abruptly cut off in order to segue into the next track, "Ruiner". On the single, the piano and background sounds of "Closer" are allowed to play out longer.

In addition, the U.S. CD single contains five remixes of "Closer", a remix of its fellow The Downward Spiral track "Heresy", an instrumental track "March of the Fuckheads" (unrelated to "March of the Pigs"), and a cover version of Soft Cell's song "Memorabilia", from their 1982 EP Non-stop Ecstatic Dancing. The UK single releases contain the same tracks split between two discs (each sold separately). A cassette single was issued in the U.S. and Australia, pairing "Closer" with a live-performance version of NIN's previous single, "March of the Pigs".