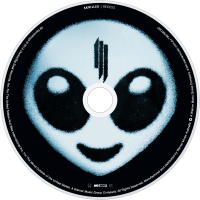 Recess is the debut studio album by American electronic music producer Skrillex, released on March 14, 2014 by Big Beat Records and Atlantic Records.
On March 7, 2014, Skrillex took part in an "ask me anything" online Reddit post. To coincide with this question-and-answer session, his website was changed to redirect to a page featuring a talking alien face, based on the Apple emoji. The face played short samples from album tracks when you clicked it. He released a mobile app, Alien Ride, on the same day which features an arcade-style objective where the spaceship has to destroy asteroids. The app displayed a countdown.When the countdown reached zero, the first song from the album was available to stream through the app. This continued in regular 30 minute intervals until the entire album was streamable for a limited time via the app.