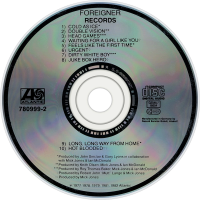 Foreigner's most lucrative years came during their first four albums, with their guitar-driven arena rock flair settling in nicely with the rest of the late-'70s music scene. Twelve of Foreigner's 16 Top 40 singles are from a six year span, between 1977 and 1982, which is why Records makes for such an entertaining collection of the band's early work. With cuts stemming from Foreigner, Double Vision, Head Games, and 4, Records lines up ten of their first 11 hit singles, somehow leaving out 1979's "Blue Morning, Blue Day." But even with this minor deletion, the album is agreeably brief, and it's the most opportune route in exploring Foreigner's best material. Both "Cold As Ice" and "Double Vision" are stellar examples of Lou Gramm's vocal gusto and Mick Jones' bang-on guitar playing, while favorites like "Urgent" (with Junior Walker on sax ), "Head Games," and "Feels Like the First Time," with its shiny keyboard segments, are unblemished radio-rock standards. The live cut of "Hot Blooded" is a nice addition as well, as is the band's second-best ballad in "Waiting for a Girl Like You," outdone only by 1984's "I Want to Know What Love Is." While Records fits the bill as a compact summation of all of Foreigner's pre-Agent Provocateur hits, it also makes for one great driving album.