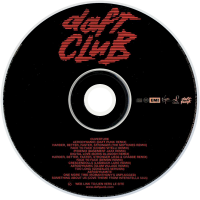 Daft Club is an album by Daft Punk featuring numerous remixes of tracks from their 2001 album Discovery and one from Homework. It was released in 2003 (2004 in the United States).
The name of the album comes from Daft Punk's online music service, which featured remixed songs, a live recording of Daft Punk performing at the Que Club (which would later be released as Alive 1997) and an a cappella and instrumental version of "Harder, Better, Faster, Stronger". The service was available for free to people who bought early versions of the Discovery album. Each album included a "Daft Club" membership card, which granted access to the Daft Club website. The service ended in January 2003.
Limited edition copies of the film Interstella 5555: The 5tory of the 5ecret 5tar 5ystem featured Daft Club as a second disc. The track "Something About Us (Love Theme from Interstella 5555)" is omitted from this version. A limited edition of this album was also released in Japan. It includes an extra track and a bonus DVD-Video. The DVD contains a preview of Interstella 5555, interviews in English with Daft Punk, a music video for "Crescendolls" from the film and a video for "Something About Us" that includes a montage of various scenes.
Tracks from Discovery were remixed in Daft Club except "Nightvision", "Superheroes", "High Life", "Veridis Quo" and "Short Circuit". In place of these tracks are additional remixes of "Face to Face", "Harder, Better, Faster, Stronger" and "Aerodynamic", respectively. Also featured is the "Aerodynamic" B-side titled "Aerodynamite", the previously-unreleased track "Ouverture" and a remix of the Homework track "Phoenix".