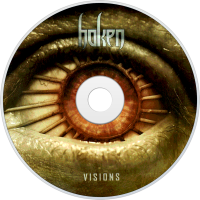 Visions is the second studio album of progressive metal band Haken. The album was released mostly for the attention of people at ProgPower USA on 17 September 2011, with an official release date set for 24 October 2011.
Unlike Aquarius, which was written mainly on the piano by Richard Henshall, Visions was mostly written on the guitar. As with the debut album, the members recorded their parts at home and then shared the files between them. The album features a string quartet and a French horn player mixed with synthetic string and brass sections.
It is a concept album like its predecessor, telling the story of "a young boy who sees his own death in his dreams and believes it's going to happen and spends the rest of his life trying to avoid it." The long closing track "Visions" is the end of the story but it makes it come full circle to the beginning. The track was written by vocalist Ross Jennings based on a premonition of his own death and it was the first song to be written, with the album growing around it.