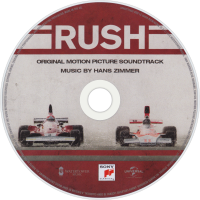 Rush is the soundtrack to the film of the same name, released on September 10, 2013. The soundtrack features a musical score composed by Hans Zimmer, plus five classic rock songs by Dave Edmunds, Steve Winwood, Mud, Thin Lizzy, and David Bowie.