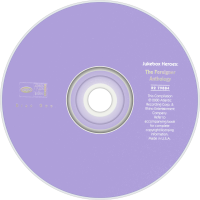 It's easy to say that Rhino's Jukebox Heroes: The Foreigner Anthology is the definitive Foreigner retrospective, simply because there's so much music here: 39 tracks over the course of two discs, including all the hits, the bulk of notable album tracks, solo cuts from Lou Gramm and Mick Jones, plus two tracks from Jones-era Spooky Tooth. Clearly, that does amount to a clearly comprehensive collection, but the question is, is this a clear-cut choice for most fans? Well, it all depends on a listener's needs. This will be too much Foreigner if you're just looking for nothing but hits, especially since the classic era (roughly defined as pre-Agent Provocateur) stops at the end of the first disc. But, anyone that truly enjoys Foreigner's big, glossy arena rock will find that this doesn't test their patience, even if it runs out of steam toward the end of the collection. Anthology keeps interest because of canny selection and sequencing. The addition of Gramm and Jones songs on the second disc works wonders, since it not only strengthens its value for consumers -- it's terrific to be able to have all Foreigner and Foreigner-related songs in one place, especially since Gramm's peerless "Midnight Blue" is not just the best thing here, it's the last great single of the album-rock era -- it accelerates the pace and keeps things interesting just as the band's output gets a little patchy. So, Anthology winds up more consistently entertaining than skeptics could have imagined. It still may not convert those skeptics, but it will prove to the listener with the curiosity to delve deeper than the hits that it's worth doing so.