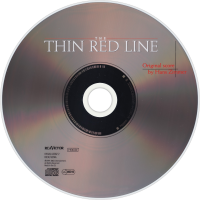 Zimmer wrote several hours of music, with several different themes, even before Malick started to shoot the film. The director then played the music on the set, while filming, to get himself, and the rest of the crew and actors in the right frame of mind. Zimmer and collaborator John Powell composed over four hours of music on this film, presumably for the director's original cut of the film. However, when director Terrence Malick re-cut the film down to its current running time of 170 minutes, he chose only a few select pieces of music from Zimmer's and Powell's musical contributions, along with original source music, and much of Zimmer's compositions were cut.
The soundtrack was nominated at the 71st Academy Awards for Original Dramatic Score.