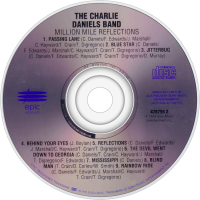 Million Mile Reflections is a studio album by The Charlie Daniels Band released on April 20, 1979. It is best known for the hit single "The Devil Went Down to Georgia". The title refers to the band having passed the million mile mark in its touring. The song Reflections is a tribute to Elvis Presley, Janis Joplin, and Ronnie Van Zant. Daniels dedicated the album to Van Zant, who had died in October, 1977 in a plane crash.