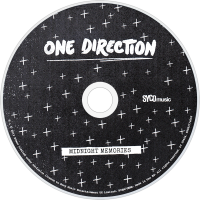 Midnight Memories is the third studio album by the English-Irish boy band One Direction, released on 25 November 2013 by Columbia Records, Syco Music and Sony Music. The album was described as having a "slightly rockier tone" than their previous efforts. It has become the fastest-selling album in Amazon UK's history, breaking the record set by One Direction's previous release, Take Me Home (2012). The album debuted at number one on the US Billboard 200, making One Direction the first group in history to debut at number one in the US with their first three albums. The album was preceded by the release of the singles "Best Song Ever" and "Story of My Life"