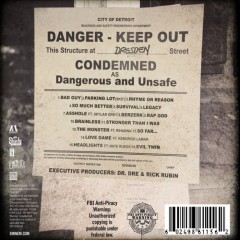 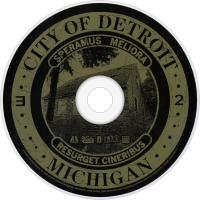 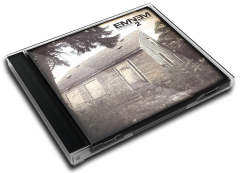 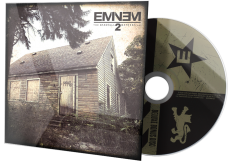 The Marshall Mathers LP 2 is the eighth studio album by American rapper Eminem, released on November 5, 2013, by Aftermath Entertainment, Shady Records, and Interscope Records. A continuation of Eminem's most acclaimed studio effort, 2000's The Marshall Mathers LP, production for the album took place from 2012 to 2013 and was handled by Eminem and other record producers, including Rick Rubin, Luis Resto, Emile Haynie, and Alex da Kid. The album features guest appearances from singers Skylar Grey, Rihanna, and Fun frontman Nate Ruess, with the only other rapper appearing on the album being Eminem's Aftermath label-mate Kendrick Lamar.
The album title was revealed during the 2013 MTV Video Music Awards on August 25 with a preview of the lead single "Berzerk", released two days later in the U.S., peaking at number three on the Billboard Hot 100. It was followed by two singles: "Survival", released on October 8, and "Rap God", released on October 15, 2013. The former debuted at number 17 on the Hot 100, and the latter at number seven. "The Monster", featuring Rihanna, was released as the album's fourth single on October 29, 2013.
The album received generally positive reviews from music critics, with praise going to Eminem's technical rapping skill and production choices. It marked an improvement in reception over some of his more recent albums, and was named on multiple "Albums of the Year" year-end lists. The album debuted at number one on the Billboard 200 and had the second highest album sales of 2013.

User Album Review
The Marshall Mathers LP 2 is the kind of sequel that gets people shouting at the screen in disbelief before their seats are warmed up. The first song, “Bad Guy,” is seven white-knuckled minutes of psycho-rap insanity in which Stan’s little brother comes back to chop Slim Shady into Slim Jims, tossing him into the trunk and driving around Detroit – listening to The Marshall Mathers LP, of course. “How’s this for publicity stunt? This should be fun/Last album now, ’cause after this you’ll be officially done,” Em raps, playing his own killer.

Eminem could use a publicity stunt, and The Marshall Mathers LP 2 is just what the therapist ordered. During the 13 years since The Marshall Mathers LP, he’s never lost his acrobat-gremlin skills on the mic. But some subsequent albums felt hermetic, perverting rage into rock-star griping on 2004’s Encore, horror-show shock tactics on 2009’s Relapse and 12-step purging on 2010’s Recovery. The Marshall Mathers LP 2 is about reclaiming a certain freewheeling buoyancy, about pissing off the world from a more open, less cynical place; he even says sorry to his mom on “Headlights,” where he’s joined by Nate Ruess of fun.

Nostalgia is everywhere. Em surrounds himself in allusions to classic hip-hop, like the Beastie Boys samples producer Rick Rubin laces together on “Berzerk.” It’s telling that the only guest MC is Kendrick Lamar on “Love Game,” probably because his slippery syllable-juggling owes a lot to Eminem.

Yet Em’s former obsession – his own media image – has been replaced with a 41-year-old’s cranky concerns. He’s still a solipsistic cretin, but in a more general, everyday sort of way. He raps about how he can’t figure out how to download Luda on his computer and waves the Nineties-geek flag with references to Jeffrey Dahmer and the Unabomber. He’s playing his best character: the demon spawn of Trailer Hell, America, hitting middle age with his middle finger up his nose while he cleans off the Kool-Aid his kids spilled on the couch.

Much of the album hews to the stark beats and melodies he loves rapping over. But the tracks that lean on classic rock are loopy and hilarious. “Rhyme or Reason” brilliantly flips a sample of the Zombies‘ “Time of the Season”; when the song asks, “Who’s your daddy,” Em answers, “I don’t have one/My mother reproduced like a Komodo dragon.” “So Far . . .” shows some love for a Rust Belt homey by rhyming over Joe Walsh’s “Life’s Been Good”: “Jed Clampett, Fred Sanford, welfare mentality helps to/Keep me grounded, that’s why I never take full advantage of wealth/I managed to dwell within these perimeters/Still cramming the shelves full of Hamburger Helper/I can’t even help it, this is the hand I was dealt to.”

MM LP 2 fits in well in the year of Yeezus and Magna Carta . . . Holy Grail, records by aging geniuses trying to figure out what the hell to do with their dad-ass selves. (It’s like hip-hop is the new Wilco or something.) Since Em has always been a mess, he’ll probably still be able to give us pause when he’s rhyming about retirement ventures through dentures and cleaning out the colostomy bag he wears up inside his saggy drawers. MM LP 3, 2026. Let’s do this.