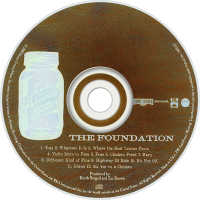 Now that Jimmy Buffett has tried repositioning himself as a country artist by cutting duets with the likes of Alan Jackson, Kenny Chesney and Clint Black, it should come as no surprise that the Parrothead influence has begun making its way into Nashville, and the first major-label effort from Zac Brown features not one but two songs ("Toes" and "Where the Boat Leaves From") devoted to the joys of getting buzzed and playing music in some seaside locale with good weather. Seeing how most of the great names of country's formative era rarely if ever sang about vacationing (beyond spending the odd night in a honky-tonk), this is an interesting and somewhat puzzling development, though Brown and his band have embraced a canny range of marketable influences on The Foundation. "Chicken Fried" is a radio-friendly homage to country-as-lifestyle (including chicken fried steak, cold beer and supporting the troops), "It's Not OK" is a less-than-good-natured rant against some panhandler that will warm the hearts of Toby Keith fans, the "lite-funk with fiddle" groove of "Different Kind of Groove" suggests these guys have been listening to a lot of Dave Matthews, and "Highway 20 Ride" and "Free" show the influence of the more sentimental branches of the Texas Singer-Songwriter tradition (through the results are more Pat Green than Robert Earl Keen). Brown has a fine voice and he and his band are solid pickers who've polished these songs to a fine semi-gloss after a few thousand nights on the road, but there's a calculated air of "something for everyone" about The Foundation that doesn't sound eclectic so much as an effort to chase down as many demographics as possible. Brown and his partners are determined to sing something you're going to like, but The Foundation would be a bit more satisfying if more of it came from the heart instead of some sort of strategy session.