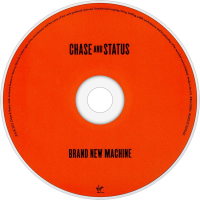 Brand New Machine is the third studio album by British bass music production duo Chase & Status. It was released on 7 October 2013 by MTA Records under exclusive license to Mercury Records. The album features vocal contributions from a new wave of British talent, including Louis M^ttrs, Moko, Jacob Banks and Elli Ingram, as well as contributions from Major Lazer, Nile Rodgers and rapper Pusha T. The duo intend to tour the album with an arena tour beginning on October 31, 2013. They also headlined 1Xtra Live at the Bournemouth International Centre on the same day as the release of the album.