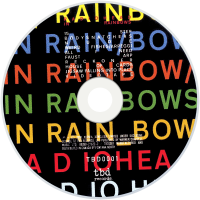 In Rainbows is the seventh studio album by the English alternative rock band Radiohead. It was self-released on 10 October 2007 as a download via a pay-what-you-want model, followed by a standard CD release in most countries in the last week of 2007. The album was released in North America on 1 January 2008 on TBD Records. In Rainbows was Radiohead's first release after the end of their contract with EMI and the end of the longest gap between studio albums in their career.

Recording with producer Nigel Godrich, Radiohead worked on In Rainbows for more than two years, beginning in early 2005. In between recording, the band toured Europe and North America for three months in mid-2006. The songwriting on In Rainbows was more personal than other Radiohead albums, with singer Thom Yorke describing most tracks as his versions of "seduction songs". Radiohead incorporated a wide variety of musical styles and instruments, using not only electronic music and string arrangements, but also pianos, celestes, and the ondes Martenot.

Upon its retail release, In Rainbows entered the UK Albums Chart and the US Billboard 200 at number one; by October 2008, it had sold more than three million copies worldwide in both digital and physical formats. The album earned widespread critical acclaim and was ranked as one of the best albums of 2007 by several publications. In 2009, it won two Grammy Awards for Best Alternative Music Album and Best Special Limited Edition Package.

Album Review
The good news: With In Rainbows Radiohead may well have created their own Physical Graffiti. Drawn from over 10 years of sketches, outtakes and live renditions that finally get nailed, it's a veritable summation of everything you love about them – from rhythmically challenging jazz funk prog to droning repetitive exhumations of the socio-political conscience (rock 'n' roll…phew). Of course it's ironic that the band has finally released what to many fans will be the true heir to OK Computer as what is ostensibly a freebie. Their new marketing and distribution model may be making a mockery of conventional business models, but it’s also making a mockery of the critic's job too. How to sum up what is obviously a MAJOR work after just a morning's worth of plays?

In Rainbows proves, once and for all that Radiohead still have the will and desire to not just weird us all out, but to make achingly, desperately beautiful music. Beginning with some of that familiar Warp-inspired glitchiness, opener, "15 Step"'s children’s voices and odd-meter clapping is astoundingly uplifting. "Bodysnatchers" is the kind of crunchy guitar rock that we’d all given up hope that they’d ever record again and "Weird Fishes/Arpeggi" takes Johnny Greenwood’s orchestral piece and turns it into a chiming thing of post-rock wonder. Already they've made you feel guilty for not donating more money for your download…

Every song’s nuances are exquisite, but problems do arise when you try to get inside the lyrics. Sometimes In Rainbows seems almost wilfully mixed to obscure Yorke’s words. Like an early Can album, little dislocated phrases or repeated mantras jump out. Shorn of context and usually sung in a slurred delivery that’s become more pronounced, this can have a deeply (and one suspects deliberately) disturbing effect.

However themes do emerge: One being the surprising inclusion of several songs about ‘relationships’. But while the opening line on “House Of Cards”, (‘I don’t want to be your friend, I just want to be your lover’) may have you worrying that Thom's turning into Prince, this is still Radiohead we’re listening to. "All I Need" is a string-drenched song of desire and dependency, but comes equipped with lines like: 'I'm the next step waiting in the wings. I’m an atom bomb trapped in your hot car', How utterly romantic.

So, big sighs of relief all round. In Rainbows is the sound of a band who effortlessly straddle the avant garde/popular divide, and also sound like they actually enjoy being themselves again. They’re back at the top of their game. Now go back and pay some more, all you 50 pence donators. This is a band that needs all the support we can give them.