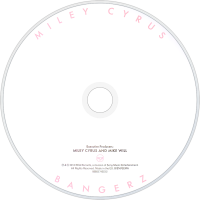 Bangerz is the upcoming fourth studio album by American singer-songwriter Miley Cyrus, scheduled to be released on October 4, 2013 by RCA Records. Described by Cyrus as "dirty south hip-hop", the album represents a musical departure from her earlier work. During its production, Cyrus collaborated with several hip hop producers to achieve her desired new sound.

"We Can't Stop" was released as the lead single from the album on June 3, 2013, and peaked at number two on the U.S. Billboard Hot 100. It has been certified double-platinum by the Recording Industry Association of America (RIAA). Its accompanying music video broke the record for the fastest music video to reach 100 million views on Vevo. "Wrecking Ball" was originally released as the first promotional single from Bangerz on August 25, 2013 and is set to be released to American radio as the second single.

In January 2013, Cyrus ended her recording contract with Hollywood Records, under which she released the albums Hannah Montana 2: Meet Miley Cyrus (2007), Breakout (2008), Can't Be Tamed (2010), and EP The Time of Our Lives (2009). Later that month, she signed a recording contract with RCA Records. In March, she confirmed that her fourth studio album would be released by the end of 2013.

On August 6, after reaching 13 million followers on Twitter, Cyrus tweeted that the record would be titled Bangerz. She later confirmed that it would be released on October 8, 2013 in the United States. On August 24, Cyrus unveiled the album artworks for the standard and deluxe versions of Bangerz; both depict a blonde Cyrus wearing a short black coat with the title "Bangerz" stylized in florescent neon lighting in front of palm trees. It was described as being reminiscent of the 1980s television series Miami Vice and an unexpected choice given her recent influence by hip hop culture. That day, Bangerz was made available for pre-order through the iTunes Store. While recording the album, Cyrus described the music on her then-untitled record to be "dirty south hip-hop". To achieve this sound, she worked with various hip hop producers, who also helped her to incorporate country music elements into the project. Producer Sean Garrett called the record "fun [and] exciting", and further stated that a collaboration that Cyrus recorded with Britney Spears would appear on the final track listing.

"We Can't Stop" was released as the lead single from Bangerz on June 3, 2013. It received generally mixed reviews from music critics, who were ambivalent towards its production and lyrics. The track peaked at number two on the US Billboard Hot 100, tying it with "Party in the U.S.A." as Cyrus' highest-peaking single in the country. Internationally, it enjoyed varying success across Europe and Oceania. The accompanying music video was released on June 19, 2013, and was noted for depicting an increasingly provocative Cyrus, an effort begun with her third record Can't Be Tamed (2010). With 10.7 million views in it first day, the clip briefly held the Vevo record for the most views in twenty-four hours before being surpassed by "Best Song Ever" by One Direction. It is currently the fastest video to reach 100 million views, having done so in 37 days.

"Wrecking Ball" was released early to download through the album's listing on iTunes on August 25, 2013. Within hours of release, the song peaked at the top of the iTunes singles chart.