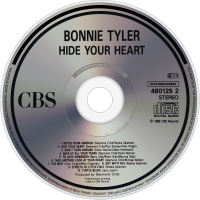 Hide Your Heart (AKA Notes From America), is the seventh album by Bonnie Tyler (Columbia CK-44163) released in 1988. It was produced by Desmond Child.

The album also features the original versions of the track "Save Up All Your Tears", which would be covered, with a faster arrangement, by Cher on her 1991 album Love Hurts, and the "The Best," later covered by Tina Turner. Also included are Bonnie Tyler's remake of Turner's 1986 B-side "Don't Turn Around" (which was also a #1 UK hit for Aswad in 1988 and an international hit for Ace of Base in 1994), and the Bee Gees' "To Love Somebody", a hit two years later for Jimmy Somerville.