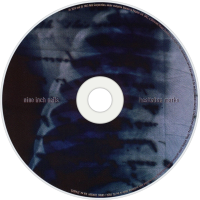 Hesitation Marks is the eighth studio album by American industrial rock act Nine Inch Nails, released on August 30, 2013. It is their first album since 2008's The Slip, and first release on Columbia Records, making this their first album released on a major label since 2007's Year Zero. The album title is derived from "hesitation wounds", marks that are produced by testing a bladed weapon before attempting suicide or self-harming.
On August 12, 2013, Amazon UK officially made the second track, "Copy of A", available for free to download. On August 22, 2013, a radio rip of "Find My Way" was uploaded to YouTube. On August 27, 2013, the album was streamed on iTunes after it leaked online. The album is available in two different masters for digital download, a "standard" version and an "Audiophile Mastered Version" - the latter having extended dynamic range, not meant to be competitive in the loudness war.