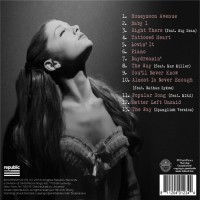 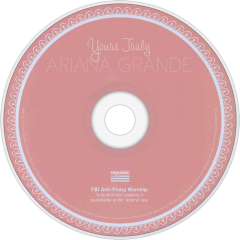 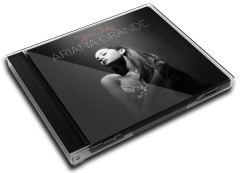 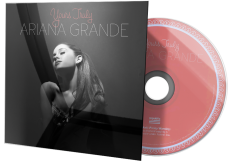 Yours Truly is the debut studio album by American recording artist Ariana Grande, Formerly titled Daydreamin', the album was released on August 30, 2013 through Republic Records. Incorporating a base core of R&B, pop music and Soul, Yours Truly was influenced by the likes of Whitney Houston, Amy Winehouse, Christina Aguilera and Mariah Carey amongst other of Grande's idols. Grande describes the album's first half as a "throwback" to the R&B music of the 1990s, and the second half being "very unique and very special that I've sort of written" which is completely original. The albums physical copy features a twelve-track standard edition, while the digital copy features the spanglish version of The Way as a bonus track. On the album, Grande co-wrote six out of the thirteen tracks.

User Album Review
Initially glancing at the cover for Ariana Grande’s newest record release, Yours Truly, the gray-scaled star (doused in spotlight) can come off as a bit too diva-esque for a debut album — but she sure does have the pop-chops to back it up. Don’t be fooled by Grande’s juvenile biography, the 20-year-old Nickelodeon actress has vocals directly comparable to the high-ranged powerhouse that is Mariah Carey herself.

Grande entered into the Top 10 with her multi-platinum lead single “The Way,” simultaneously swooping up a broader demographic of listeners. Previously, the former “Victorious” actress released immature disasters like “Put Your Hearts Up,” along with a variety of poorly chosen covers such as Demi Lovato’s “You’re My Only Shorty.” The new R&B aim for Grande’s career spawns a serious tonality in her work, thus canning the teenybopper image that was so heavily embedded into her music.

“The Way” became representative of the overall direction of Yours Truly — an R&B-style record almost entirely written and produced by Harmony Samuels and Babyface. Babyface, the ten-time Grammy Winner singer-songwriter, is notable for being a hit-maker for Mariah Carey. Therefore, it’s only rational that Grande and Republic Records would recruit a songwriting legend for such a comparable voice. Points awarded for rationality, points lost for unoriginality.

Unoriginality is further spotted in “Daydreamin,’ ” one of the first tracks recorded for the album. The song is melodically indistinguishable from Grease’s “Beauty School Dropout,” specifically when tapping the piano keys in the track’s introduction. This song title was initially the title of the record, but the Yours Truly title appeared after controversy in name-similarity to Mariah Carey’s album Daydream.

Most tracks are of quality composition, lyrically and melodically, but beat usage becomes excessive at times. The record’s second promotional single, “Baby I,” exploits nearly every beat in existence, resulting in messiness. Putting soul snaps on the majority of tracks also becomes increasingly monotonous. Despite this production flaw, the album practices a worthy bassline and vocal mix, using many pleasant harmonies.

The collaborations provide considerable assistance in Grande’s strive to be taken seriously on this debut. Mac Miller and Big Sean may lean toward the obnoxious side of rapping, but following a trend certainly helps when trying to sit at the same table as industry dominators. “Popular Song,” however, will do MIKA more favors in the long run as he attempts to break into the American music demographic.

Truthfully, it’s difficult not to label Grande as a Mariah-Carey ripoff, but consider this: Where is Mariah Carey now? The fact that an artist with that much legendary prowess can’t even scrape a Top-10 hit or sell a decent number of records is frankly embarrassing. It’s no wonder her new record is called The Art of Letting Go. Carey needs to let go of her career and let someone else take the reigns. And Grande may very well be just the singer for that.