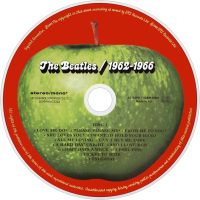 1962–1966 (widely known as "The Red Album") is a compilation of songs by the English rock band The Beatles, spanning the years indicated in the title. It was released with its counterpart 1967–1970 ("The Blue Album") in 1973. 1962–1966 reached number 3 in the United Kingdom and managed to reach number 1 in the United States Cashbox albums chart. However, in the US, the official chart was administered by Billboard, where 1962–1966 peaked at number 3, while 1967–1970 reached the top spot. This album was re-released in September 1993 on compact disc, charting at number 3 in the UK.

The album was compiled by Beatles manager Allen Klein. Even though the group had had success with cover versions of songs, most notably with "Twist and Shout", which made number 2 on the Billboard charts, only songs composed by the Beatles themselves were included.

As with 1967–1970, this compilation was produced by Apple/EMI at least partially in response to a bootleg collection titled Alpha Omega, which had been sold on television the previous year. Print advertising for the two records made a point of declaring them "the only authorized collection of the Beatles.