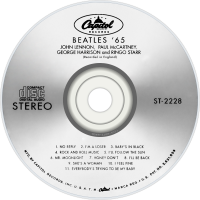 Beatles '65 is the Beatles' fifth Capitol release, but seventh American album. It was released in mono and stereo versions. The album was also issued in Germany on the Odeon label.

On 16 November 2004, this album was released on Compact Disc for the first time as part of The Capitol Albums, Volume 1 box set.

In the US the album was a blockbuster hit, and jumped from number 98 straight to number one, making the biggest jump to the top position in the history of the Billboard Album Charts up to that time. It remained at number one for nine straight weeks, starting on 9 January 1965. In what may be testament to the overwhelming market appeal of the Beatles, several albums were released and promoted in America during 1965 sporting a similar title. These included Sinatra '65 by Frank Sinatra and Ellington '65 by Duke Ellington on Reprise Records, Trio '65 by jazz pianist Bill Evans on Verve Records, and Brasil '65 by Sérgio Mendes on the Beatles' own Capitol label.