Just Another Crime in Massacreland 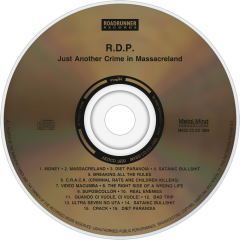 At the decline of the thrash scene, under tension and personal problems (Jabá left the band and they had a heavy drug problem), they entered into the studio in 1994 to record their only 'all lyrics in English' album, called Just Another Crime In Massacreland. The album suffered a thin production and a low promotion by the label, and it was a hard time in the life of RxDxPx.