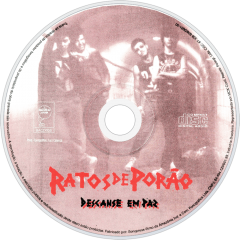 In 1985, RxDxPx came back, but with a different line up and sound. They brought thrash metal to their music, influenced by bands such as Slayer, Exodus, Kreator and hardcore bands around the world that were also transitioning to a more thrash metal sound, like Suicidal Tendencies, D.R.I., English Dogs, Cro-Mags, Agnostic Front and others (including Brazilian bands such as Lobotomia and Armagedom). Jão switched over to playing guitar, and an old punk named Spaghetti (who later adopted a thrash metal sound) replaced him on drums. Subsequently, they released the Descanse Em Paz album on Baratos Afins in 1986.