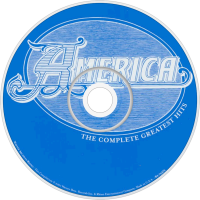 The Complete Greatest Hits is the fourth principal major label compilation album by American folk rock duo America, released by Rhino Records in 2001. This is the first America compilation to feature all 17 of the group's Billboard Hot 100 singles. The album was intended to update and expand upon History: America's Greatest Hits, the group's all-time best selling album. It includes two new tracks released exclusively on this collection. This was the group's first album to chart since 1984's Perspective, reaching 152 on the Billboard album charts.