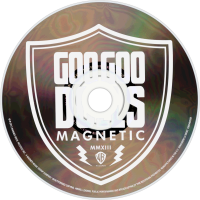 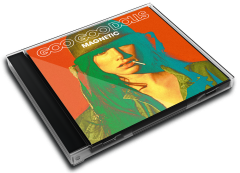 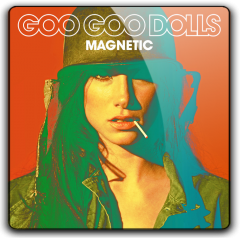 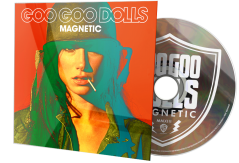 The Goo Goo Dolls remain one of the last mainstays from the heyday of the alternative rock era of the late nineties. Since their breakthrough album Dizzy Up the Girl (1998), the Dolls have been churning out new material like clockwork every four years. First was the upbeat, yet deceptively dark Gutterflower (2002), next came the soft rock polish of Let Love In (2006), and their most recent album up to now, Something For the Rest of Us (2010), showed, if nothing else, the Dolls consistency at making their own brand of radio friendly soft rock. The music was never terrible, never even unfriendly to most listeners, but after Gutterflower, the music became more and more typical, since all their songs mainly just stuck to the band's tried and true sound.

It being the first Goo Goo Dolls studio album released in an odd numbered year since 1995, the band's tenth album, Magnetic, was supposed to be the album that could have changed it all for the Dolls. Its orange album artwork features a cigarette-smoking girl dressed in military gear; its slightly warped portrait being the brightest colored artwork that the Dolls have utilized in a while, rekindling fond memories of the girl on the bright red artwork of Gutterflower. Would this change in color also mark a shift in the sound for the Goo Goo Dolls?

Well, that's a hard question to answer. Lead single and first track “Rebel Beat” certainly gives the indication of a slight change in sound (albeit a small one), for the Goo Goo Dolls. The arrangement of “Rebel Beat” sounds like it has been directly influenced by a band like OneRepublic, but still is a typical album opener in that it utilizes a nice intro into the upbeat, acoustic guitar driven strumming in the chorus. It certainly doesn't illustrate the dramatic change that some may have been hoping for, and, it certainly does not end up representing Magnetic as a whole. Throughout the album, instances of a change in the Goo Goo Dolls sound remain small, yet sometimes become extremely evident to a careful listener. On a track like “More of You,” lead singer Johnny Rzeznik ends up sounding more like the Dolls' radio friends Matchbox 20, and the arrangement features the prominent shouting of "Hey!" in the style of some of the bands looking to the Dolls' place such as the Lumineers. It is also tough to see bassist Robby Takac still only gets his traditional two track limit on Magnetic even though he has been writing some of the better songs that the Goo Goo Dolls have released recently. But, even Takac shows some changes of his own on “Happiest of Days,” a straight up string ballad that shows off his distinct gravelly voice.

But for every step forward, there's a step back, and in this case, the step back is the Goo Goo Dolls reverting to what has been safe for them. “Last Hot Night” is essentially a rewrite of 2006's album opener “Stay With You,” “Slow it Down” features guitar reminiscent of the Let Love In album track “Can't Let It Go,” and the other Rzeznik written tracks mainly are upbeat, sonically layered, soft rock anthems. This stickiness in songwriting could come off as being a little mundane for some, but, don't get the wrong idea: these are solid songs that have no real faults other than sounding similar while sometimes getting lost in their own lyrical vagueness and stumbling (the most notable lyrical fault being on “Slow it Down,” where Rzeznik states: “I still remember you/the dizzy dance with me and you/we lived our lives without a clue/and never tried to find the meaning”). There are some songs on this album that even shine through above the other average ones, namely “Keep the Car Running,” a Rzeznik sung anthem that actually hits the mark, and “Bringing On the Light,” which is Takac's only other appearance on the album, still shows that he has the ability to write songs that contrast and complement Rzeznik's slower, more dramatic ballads.

In the end, Magnetic, while not life-altering or experimental in any way, is an album that once again shows that the Goo Goo Dolls still have the ability to do what they have always done relatively well. Give Rzeznik, Takac, and drummer Mike Malanin some credit, the trio as it is has lasted for 18 years, (and the band itself has been around for 25), but on Magnetic, the sound of an increasingly weary band is beginning to become apparent. No one is asking for the Goo Goo Dolls to do something completely off the wall, but obviously, Rzeznik's voice no longer has the same pop as it used to back in the nineties, the guitar work is less intricate, and the drumming is not as hard hitting as it used to be. But, throughout all the monotony, all the even numbered years gone by, all the predictable track listings, and all the album artworks prominently featuring raven haired girls, the Goo Goo Dolls somehow remain a band that still show a great talent in staying chart and radio relevant just doing what they do best.