The Ring / The Ring Two 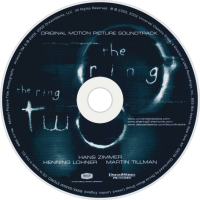 When the horror film The Ring, director Gore Verbinski's English-language remake of the Japanese movie Ringu, was released in October 2002, it was not thought to rate a soundtrack album. But $250 million in worldwide grosses later, that must have seemed like a mistaken decision, so DreamWorks Pictures and Decca Records made up for it with the appearance in March 2005 of this soundtrack album, which mixes music from both The Ring and The Ring Two (the latter film based on Ringu 2 and directed by Hideo Nakata, who directed both Ringu and Ringu 2, in his American debut)