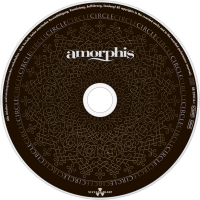 Circle is the eleventh studio album by Finnish heavy metal band Amorphis. Recorded at Petrax Studio in Hollola and at 5K Studios in Helsinki, it is the first Amorphis album since 2003's Far from the Sun not to be produced by Marco Hietala, or to be based on the Finnish national epic Kalevala. Instead, Circle was produced by Peter Tägtgren and focuses on an original story penned by lyricist Pekka Kainulainen. The album was released on April 19, 2013 through Nuclear Blast Records.