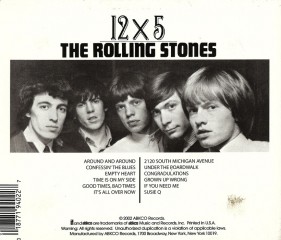 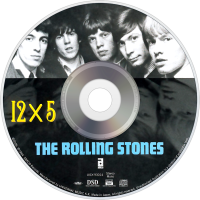 The album, like its predecessor, largely featured R&B covers; however, it does contain three compositions from the still-developing Mick Jagger/Keith Richards songwriting team, as well as two group compositions under the pseudonym of "Nanker Phelge". 12 X 5 is notable for featuring the first, and less-often-heard, of the Stones' two versions of Jerry Ragovoy's "Time Is On My Side", with a prominent electronic organ part instead of the better-known version's electric guitar.

After a series of sessions in Chicago in June 1964, The Rolling Stones' UK label Decca Records released the five-song EP Five by Five. Because EPs were never a lucrative format in the US, London Records—their American distributor at the time—spread the EP songs across an entire album, adding seven new recordings to create a release of 12 songs by five musicians, hence the album's title. The rest of the songs were singles "It's All Over Now" and "Time Is On My Side" with their B-sides, plus three songs that were later included on The Rolling Stones No. 2 album. Decca would use the same cover (minus the lettering) for The Rolling Stones' second UK album The Rolling Stones No. 2 in early 1965.

In August 2002, 12 X 5 was reissued in a new remastered CD and SACD digipak by ABKCO Records. This edition includes stereo versions of "Around and Around", "Confessin' the Blues", "Empty Heart", "It's All Over Now", an extended version of "2120 South Michigan Avenue", and "If You Need Me".