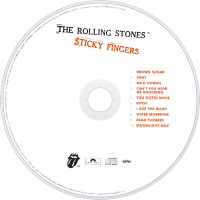 Sticky Fingers is the ninth British and 11th American studio album by English rock band The Rolling Stones, released in April 1971. It is the band's first album of the 1970s and its first release on the band's newly formed label, Rolling Stones Records, after having been contracted since 1963 with Decca Records in the UK and London Records in the US. It is also Mick Taylor's first full-length appearance on a Rolling Stones album, the first Rolling Stones album not to feature any contributions from guitarist and founder Brian Jones and the first one on which Mick Jagger is credited with playing guitar.
The album is often regarded as one of the Stones' best, containing songs such as the chart-topping "Brown Sugar" and the folk-influenced "Wild Horses", along with the 2 part, Latin-inspired, "Can't You Hear Me Knocking" and achieving triple platinum certification in the US.

User Album Review
By 1970 the Stones had earned the right to take a little time to turn out their next album. Bedding in new boy, Mick Taylor, on their well-documented tour of the States the year before had also involved a little studio time at Muscle Shoals studio. The results of these sessions and songs held over from Beggars Banquet were also brought to the table when they reconvened, still a little bruised from the apocalyptic events at Altamont. These were now grown-up men with families, demons and more to cope with who assembled at Jagger’s Stargroves mansion with their mobile studio in the summer of 1970.
In the topsy-turvy world of success they’d had more than their share of recent ups and downs. Sticky Fingers was destined to be the triumphant first release from their self-owned label but this success was leavened by the fact that they’d signed over their back catalogue to previous manager Allen Klein and had to give him the royalties from Brown Sugar and Sway to boot. The incessant touring meant that the band were now world citizens, but they still moved closer to their American roots. Using the usual support cast of Bobby Keys, Ry Cooder and Nicky Hopkins they turned their experiences into ten tracks of narcotic misery and sexual frustration. All wrapped in a very louche Andy Warhol sleeve.
Narcotics are a major theme, of course, but also loss, frustration and incredible world-weariness. Reviews at the time complained that Sticky Fingers lacked the bite of previous releases like Let It Bleed or Beggars Banquet, but it’s this very quality that makes the album special. Like Neil Young’s Tonight’s the Night, the sense of a wake creeps through tracks like Dead Flowers and Sister Morphine.
Elsewhere, the Delta serves as a touchstone for some of Jagger’s most heartfelt wailing as on I Got the Blues and You've Gotta Move, while he’s never bettered his lechery on Brown Sugar. Taylor’s arrival is keenly felt on Can’t You Hear Me Knocking?, with its Santana-esque coda. Sway and Bitch are hard-bitten rockers that couldn't exist without Charlie’s taut snare.
Eventually the whole thing collapses in on itself with Moonlight Mile. A coked-out, somnambulant drift through an era’s last days, and a beautiful end to a beautiful journey. While many hold their next album, Exile On Main St., as their zenith, Sticky Fingers, balancing on the knife edge between the 60s and 70s, remains their most coherent statement.