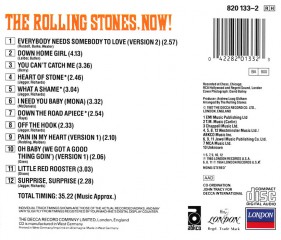 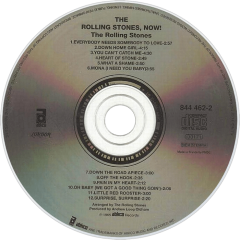 he Rolling Stones, Now! is the third American studio album by the Rolling Stones, released in 1965 by their initial American distributor, London Records.
The album contained seven tracks from their second UK album The Rolling Stones No. 2, the recent US Top 20 hit "Heart of Stone", the recent UK #1 hit single "Little Red Rooster", "Surprise, Surprise" which wouldn't be issued in the UK until 1970 as a B-side of "Street Fighting Man", "Mona (I Need You Baby)" from The Rolling Stones and "Oh Baby (We Got A Good Thing Goin')" which would appear on the UK edition of the Stones' next album Out of Our Heads later in 1965. The album contains a different, and shorter, version of "Everybody Needs Somebody to Love" than the recording on The Rolling Stones No. 2, although the latter version was accidentally used on the 1986 CD of "The Rolling Stones Now." The 2002 CD includes the shorter version, as heard on the original LP. Four of the songs on The Rolling Stones, Now! were penned by the songwriting team of Mick Jagger and Keith Richards (who dropped the "s" from his surname until 1978).
For the back cover, London Records simply took the back cover of The Rolling Stones No. 2 and amended the tracklisting and label information. Where the UK liner cover said "No. 2" after 'THE ROLLING STONES' was simply whited out for the American cover. One thing that was overlooked, however, was a mention of Ian Stewart playing organ on "Time Is On My Side," which made no sense on The Rolling Stones, Now! as the song was not on that album. This credit was deleted from the 1986 and 2002 reissues.
The liner notes on initial pressings contained Andrew Loog Oldham's advice to the record buying public, which was quickly temporarily removed from some subsequent pressings:
"(This is THE STONES new disc within. Cast deep in your pockets for the loot to buy this disc of groovies and fancy words. If you don't have the bread, see that blind man knock him on the head, steal his wallet and low and behold you have the loot, if you put in the boot, good, another one sold!)"
The Rolling Stones, Now! is generally considered a very strong album and a highlight of their early American releases. Upon its February issuing, The Rolling Stones, Now! reached #5 in the US and became another gold seller for The Rolling Stones. In 2003, the album was ranked number 180 on Rolling Stone magazine's list of the 500 greatest albums of all time.
In August 2002 The Rolling Stones, Now! was reissued in a new remastered CD and SACD digipak by ABKCO Records. This version included stereo mixes of "Heart of Stone", "What a Shame", and "Down the Road Apiece".