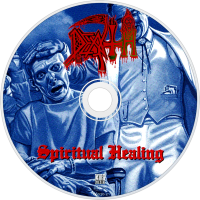 Spiritual Healing is the third album by death metal band Death, released in February 1990. This album was out of print, but it has been reissued by Relapse Records as of November 2012.

The members of Death and their manager Eric Greif stayed in a single motel room at the Safari Inn, near Busch Gardens, for the entire six weeks the album was recorded and mixed, although bassist Terry Butler and drummer Bill Andrews frequently went home as they lived in the Tampa area.

This was the final Death album cover painted by Ed Repka, and was also the last album to feature bassist Terry Butler and drummer Bill Andrews.