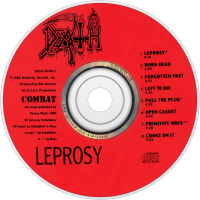 Leprosy is the second album by death metal band Death, released in 1988. Notably different in tone and quality from the 1987 debut, it is the first example of Scott Burns' work heard on many of the death metal and grindcore albums of that era.