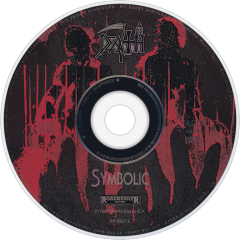 Symbolic is the sixth album by American death metal band Death. The album was released on March 21, 1995 through Roadrunner Records. The album was remastered and reissued on April 1, 2008 with five bonus tracks.

Like its predecessors, the album is progressive and technically advanced. It also has higher production values than previous albums, with considerably less static on its overall sound. It is notable that the average song length on this album is around five minutes, while it was around four minutes on Human and Individual Thought Patterns, perhaps due to slowed down song tempos closer to that of traditional death metal. It was also the only album to feature Kelly Conlon on bass. Chuck Schuldiner's growl also became noticeably higher on this release.