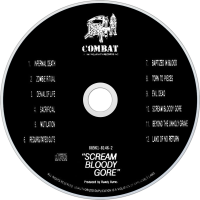 Scream Bloody Gore is the debut album by American band Death, released in 1987 and considered “the first true death metal record”. Chuck Schuldiner plays bass, wrote all the songs on the album and provides vocals in addition to guitar for the album. John Hand is noted on the cover as playing rhythm guitar, though this was incorrect and Hand was only in the band for a short period and was not on the recording. This is also the only Death album to feature drummer Chris Reifert, who had joined for the Mutilation demo.